RH Chisholm was a pioneer in early America and the founding of Texas. Earliest records have him in Texas in 1828 where he started a family, ran a ferry,founded the town of Clinton, Texas (outside present-day Cuero, Texas) and was father to Thornton Chisholm who drove cattle north in 1866. The efforts of the Chisholm Family Foundation are to preserve that pioneering spirit from 200 years ago and harness it for the era we live in today. It is our goal to strengthen the current generation by taking a page from the past and learn and practice the traits that led our pioneering ancestors to persevere and overcome.

We boldly profess Christ and believe our Founding Fathers and Pioneers of the Westward expansion held Judeo Christian values that allowed for, fought

and died for, the freedom of religion enjoyed by all faiths in America today. We adhere to the Evangelical Free Church of America Statement of Faith:

We are a new organization and plan to apply for membership to ECFA as soon as we are able once established, and therefore strive to plan and implement

standards consistent with membership in the Evangelical Council for Financial Accountability:

M i. Glenn Thornton Chisholm was born in 1831. He died in Mar 1868. Married Jane Fore and had six children. When Thornton died, and

Maryann died, Jane married John Kelso and raised their seven kids, had another with John, and took in an orphaned girl.

F iii. Maryann Chisholm was born in 1842. She died about 1876. Married John Roebuck Kelso and had seven children.

Richard was killed along with Buck Taylor at Clinton by Bill Sutton and Dock White. (From Fannie G. Chisholm book) Some say the beginning of the

Taylor-Sutton Feud. Others say it went back further.

We are partnering with Trail Media to publish several books detailing the history, triumphs and struggles in hopes of encouraging strength needed for

future generations to face their own challenges and overcome. 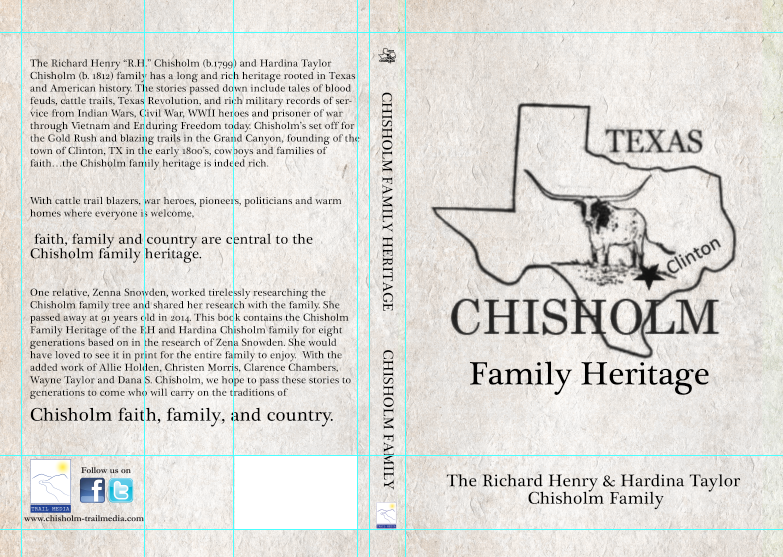 All the Chisholm covers here

We are also striving to purchase the original “Public Square” in what was once the pioneer town of Clinton,

moved to Cuero, TX when the new railroad came through on the other side of the river. Nothing is left of

of the Courthouse. We hope to restore the well and the Public Square open to the public for educational purposes.

Focus will be on the heritage in the first cattle brands recorded in the local counties, education about the cattle industry and pioneers of America and

Texas, and the Longhorn cattle that fed a nation after the Civil War during recovery and Reconstruction. In many ways, our country is divided today. We

need the cattle, the cowboys, the pioneering spirit once again.